Client Experience Menu |Everything Else

It was quite the contrast between Q4 2018 and Q1 2019. While global shares posted sharp declines in late 2018 due to concerns over global trade, slowing economic growth and the US Federal Reserve’s signals on interest rate rises, these issues were either addressed to satisfaction, or no longer of great concern, as global shares went on a recovery rally during the first quarter of 2019.

In the US the Federal Reserve confirmed it would adjust planned interest rate hikes to compensate for deteriorating economic momentum, meanwhile the US government shutdown also ended. The Fed settled further into its dovish stance as the quarter progressed as several indicators reflected slower economic growth. Q4 GDP (quarter-on-quarter, annualised) was adjusted downwards to 2.2% from the initial 2.6% reading. There was also renewed hope of progress on the ever-present US-China trade tensions as the US suspended planned tariffs hikes on Chinese goods.

The Eurozone was also buoyed by the suggestion of a more dovish monetary policy. The European Central Bank said rates would remain at current levels at least until the end of the year. This was off the back of growth worries, as the Eurozone economy grew by just 0.2% in the final three months of 2018. Forward-looking data also pointed to weakness. The flash manufacturing purchasing managers’ index fell to 47.6 in March from February’s final reading of 49.3 (a reading below 50 indicates contraction).

In the UK, the labour market bucked a wider slowdown in the economy and real wages remained in positive territory as inflation was muted. The economy slowed during the fourth quarter of 2018 when Brexit uncertainty weighed on business investment. The Office for National Statistics revealed that GDP growth decelerated to 0.2% in Q4 from 0.7% in Q3 2018 and confirmed that economy grew at 1.4% in 2018, the lowest rate for several years.

Japanese economic data released in March was generally in line with expectations. Headline inflation was slightly ahead of forecasts with a broadening range of categories seeing some increase in prices. The Bank of Japan’s quarterly Tankan survey was also released just after the end of the quarter. Although conditions for large manufacturers have deteriorated, this was to be expected given the global backdrop at the time the survey was taken.

In Australia, the Reserve Bank again left the cash rate unchanged throughout the quarter as Annualised GDP growth slowed from nearly 4% in the first half of 2018 to around 1% in the second half. Meanwhile, housing continued to fall in many Australian cities, with Sydney prices now 13% from their 2017 peak.

Elsewhere, China’s economy grew at its weakest pace since 1990. January-February data pointed to a continued slowdown. The Chinese government lowered its full-year growth target to 6-6.5% and outlined higher public spending and tax cuts, while the central bank cut the reserve requirement ratios for banks.

The following outlines the returns across the various asset classes to the 31st March 2019.

The unpredictable nature of global markets was highlighted by a stunning bounce back in shares around the world in the first quarter, reversing a poor end to 2018.

US shares rebounded from a weak end to 2018 to post significant gains in Q1. Although sentiment cooled by quarter end, gains were widespread for the quarter overall. The IT sector – having suffered a difficult Q4 – performed especially well. Healthcare generated more muted gains due to uncertainty over potential regulatory changes. Gains in financials were also hindered by the Fed’s comments on rate trajectory. 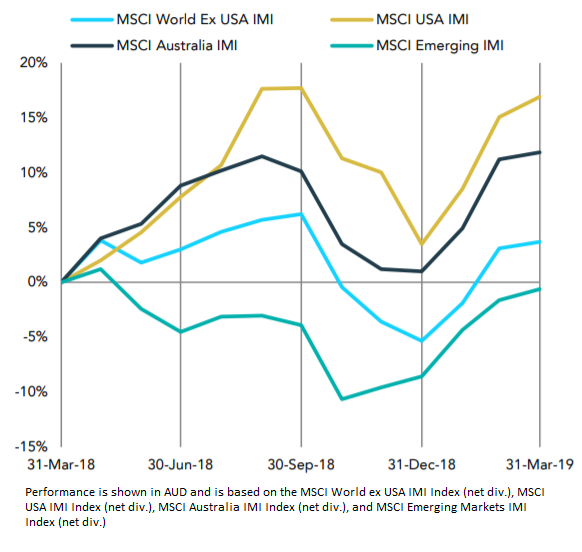 Eurozone shares enjoyed strong gains in the first quarter, rebounding from weakness at the end of 2018. Stock markets were supported by central banks stepping away from tighter monetary policy. It was a mixed picture for stock market sectors. Economically-sensitive areas of the market such as industrials and information technology performed well, but the safe haven consumer staples and real estate sectors were also among the top performers. The sharemarket in the UK also posted strong gains.

The Japanese sharemarket return of 7.7% was somewhat muted compared to other developed markets, and the gradual uptrend was punctuated by some significant individual daily declines. Most of the negative surprises were driven by the sharper-than-expected slowdown in the external environment, especially in China. This particularly affected results in the automotive sector while many tech stocks were also impacted by the slowdown in smartphone sales.

Emerging market shares posted a strong return in Q1, led by China. The MSCI Emerging Markets Index increased in value but underperformed the MSCI World. China A-shares were particularly strong as MSCI announced plans to quadruple their weight in the index between May and November.

The Australian market registered its best quarterly performance since coming out of the financial crisis.  According to Bloomberg data, it was the Australian market’s best first quarter in three decades of record keeping. The New Zealand market rose nearly 12% over the quarter, reaching record highs in late March.

Australia’s gains were led by materials stocks. Fortescue Metals was a standout, powered by iron ore prices hitting five–year highs. Strong gains were also posted in the sectors of IT, communication services, energy and real estate. Financials lagged the overall market, though, amid continued fallout from the Hayne Royal Commission.

Photo by Roman Kraft on Unsplash

This material is provided for information only. No account has been taken of the objectives, financial situation or needs of any particular person or entity. Accordingly, to the extent that this material may constitute general financial product advice, investors should, before acting on the advice, consider the appropriateness of the advice, having regard to the investor’s objectives, financial situation and needs. This is not an offer or recommendation to buy or sell securities or other financial products, nor a solicitation for deposits or other business, whether directly or indirectly.

We'd love to meet you

Get In Touch With Us

Stay in the loop